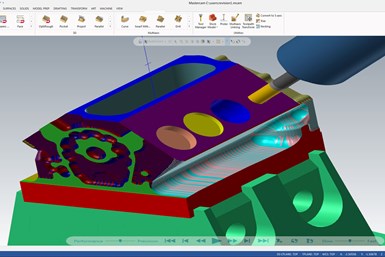 Rendering complex parts inside CAD/CAM programs such as Mastercam requires powerful computer parts. Processors calculate and implement the results of user commands, RAM supports the complexity of the program and document and video cards render the three-dimensional environment and image on-screen. Image courtesy of Mastercam.

Error messages and lagging software are the last things any programmer should be dealing with when creating new parts. Unfortunately, this is exactly what can happen when using a computer that does not meet a CAD/CAM software’s system requirements. System requirements are the set of hardware and software specifications a computer must meet for a program to run smoothly, and often come in pairs of “minimum” and “recommended” specifications.

A computer’s operating system (OS) controls its most basic functions and provides the user with a graphical user interface (GUI) with which they can access files, folders and programs. The OS determines how a user interacts with their computer and can only run software built to be compatible with it. Windows and macOS are the most common OS types, though other types such as Linux and Chrome OS also exist.

To check which Windows OS you have, follow these instructions: How to Determine Your Windows Operating System.

To check which macOS you have, follow these instructions: How to Determine Your Mac Operating System.

A computer’s processor is the electronic circuit that runs it. Processors perform commands and calculations according to the OS’ instructions. While differing numbers of cores and increasing efficiency between processor generations make direct recommendations difficult, Mastercam says a 64-bit quad-core processor with a base clock speed of 2.0 GHz should be the bare minimum for CAD/CAM work. Intel and AMD are the leading computer processor manufacturers, with each offering multiple processor configurations that differ in power and price point. Intel i7 or i9 processors are the most powerful general-use processors in their generations, with Intel Xeon processors being more workstation-focused. AMD Ryzen processors are that brand’s comparable processors, with both general-use and workstation-focused models.

To check which processor you have on a Windows PC, follow these instructions: How to Find Out What Processor You Have.

To check which processor you have on a Mac, follow the same instructions for determining your operating system — the same dialog box should show your processor.

A computer’s system memory stores the information the unit accumulates during operation. Memory can be random access memory (RAM), which is temporary, or read-only memory (ROM), which is permanent. Mastercam lists 8 GB of RAM as a minimum requirement, but recommends 32 GB — a standard common to many CAD/CAM systems. More RAM means the computer will be able to support documents of higher complexity and open multiple demanding applications and documents simultaneously.

To find the memory information for your computer, follow these instructions: How to Check How Much RAM You Have on a Mac or PC.

The video capabilities of a computer control how easily it can track and display functions graphically. Intel, Nvidia and AMD create the most common workspace graphics cards, but as with processors, Apple has begun to create its own as well. Intel and AMD cards can be “dedicated” or “integrated,” with dedicated cards being more powerful and integrated cards being tied to the computer processor. Nvidia only offers dedicated cards, while today’s Apple computers only offer integrated cards (older Apple computers using Intel processors may have dedicated Nvidia or AMD cards). All computers come standard with integrated graphics cards, with dedicated cards typically offered as additional parts or bundled in more powerful computer configurations. Many CAD/CAM software providers require dedicated cards, but recent advances in integrated cards can enable these cards to work in a pinch. Mastercam requires that cards support OpenGL 3.2 and OpenCL 1.2 at a bare minimum.

Because CAD/CAM software is such a visual program, it is important to meet the minimum — if not recommended — requirements for optimal programming. Most CAD/CAM software companies recommend having at least 1 GB of video card memory (VRAM) but recommend 4 GB or more. As with processors, not all video cards with equal amounts of VRAM are equally powerful, and newer cards are generally more powerful. Integrated graphics cards do not have their own VRAM, but instead substitute a portion of a computer’s RAM as VRAM.

If you are experiencing display issues, installing the latest drivers for your video card may solve these problems. Most computers have onboard software to guide you through installing these drivers, but they are also available directly from their creators’ websites.

To learn more about your computer’s graphics card, follow these instructions: Checking the Graphics Card Specifications on Your Computer.

Digital data is stored within physical devices like hard drives. These devices offer differing amounts of data storage depending on their design. CAD/CAM software typically requires users to have at least 20 GB of disk space free for installation, but additional space is useful for storing large CAD/CAM files. Minimum requirements tend to list a traditional hard drive, but solid-state drives (SSDs) offer better performance. SSDs perform the same basic purpose as hard drives, but are much faster and more reliable, retaining data even without power. Flash drives and external hard drives can be useful for moving documents between computers, but installing CAD/CAM software on them will typically result in slower performance, and is not recommended.

To learn more about SSDs, visit this guide to buying solid-state drives: What to Look for When Buying an SSD.

The graphics of any program are limited by what a computer’s monitor, or screen, can display. Monitor resolution is measured in pixels. The more pixels, the clearer the image. The industry standard Full High Definition (FHD) resolution is 1920×1080, which means the screen will be 1920 pixels wide and 1080 pixels tall. These pixel counts are not linked to any size of computer screen. That is, a 15” screen and a 24” screen might both have a 1920×1080 resolution — the density of these pixels will make the image smoother on the smaller screen, but larger (if blockier) on the bigger screen. Higher resolution monitors such as Quality High Definition (2560×1440) or 4K (3840×2160) monitors increase the smoothness of the image, but require more powerful graphics cards with more VRAM to maintain performance. Users can also connect multiple monitors to one computer to increase the size of the workspace or easy access multiple programs simultaneously.

To find the resolution of your monitor, follow these instructions: What is My Screen Resolution?.

Read: The Job Shop Is the First Half of the Business

All CAD/CAM systems will require a three-button, scroll-wheel mouse. A 3D mouse is an advanced version of the mouse most people are familiar with. These mice are specifically designed for movement in three virtual dimensions, and therefore perform well in CAD applications. Although most systems do not require a 3D mouse for operation, a 3Dconnexion mouse may be recommended for optimal (and convenient) performance.

Checking computers’ technical specifications against a CAD/CAM software’s system requirements before purchasing either can go a long way to avoiding problems and achieving optimal performance. The software developer should have the system requirements clearly spelled out on their website. For more in-depth help, software providers should be able to provide guidance.