Female employees in the West Wing earn a median salary of $83,467, more than $16,000 less than the median salary of $100,000 for male employees, an analysis of a White House salary disclosure found. The 16.5 percent wage discrepancy tracks almost perfectly with the national gender pay gap, according to President Joe Biden’s own proclamation on Equal Pay Day in March, which stated that women across the nation make 17 cents less per dollar than men. 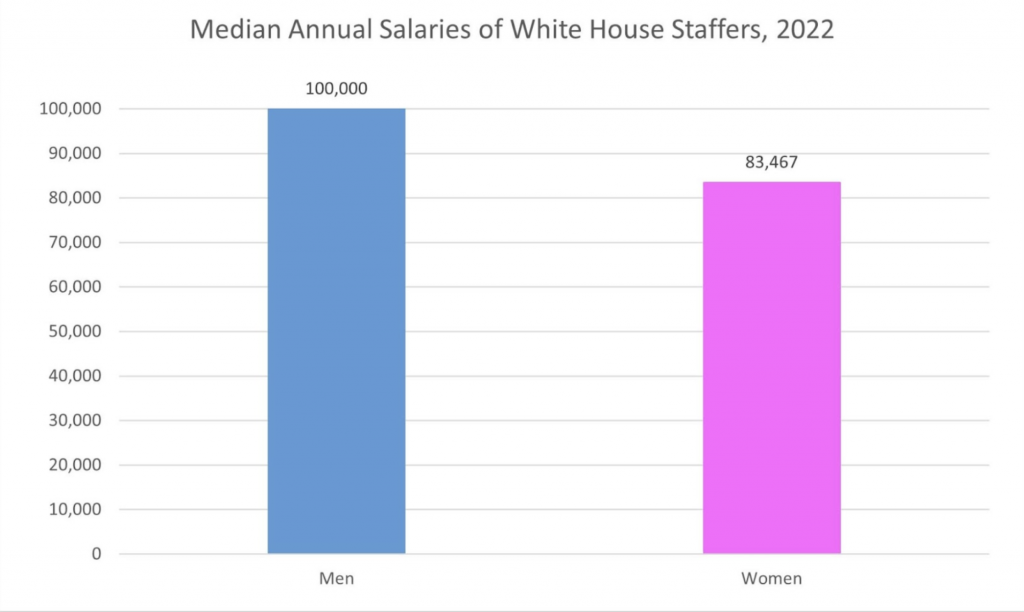 The existence of a gender pay gap at the White House is indicative of the difficulty of closing the gap even for those who view it as an economic injustice. Economic experts say the gender pay gap in the United States is not the result of discrimination against women, but of other factors including the decision to have a family. Studies show that men and women with the same jobs and qualifications are paid equally.

“The next time you hear the Biden administration citing a national gender pay gap of 17 percent based on median earnings and using that difference to advance measures to achieve greater pay equity and address gender discrimination, it should be noted that Biden’s own White House has a similar pay gap of 16.5 percent,” said Mark Perry, a University of Michigan economist and senior fellow at the American Enterprise Institute. “In both cases, those differences in earnings by gender are not primarily the result of gender discrimination but are the result of many other factors.”

In March, the Biden administration released a list of commitments to “Advance Pay Equity and Support Women’s Economic Security.” The announcement claimed that a woman makes 83 cents for every man’s dollar. In June 2021, Biden signed an executive order that called on the Office of Personnel Management to review compensation packages and report back to the president on how to advance equal pay.

During his 2020 presidential campaign, Biden pledged to “close the gender pay gap” and fight gender discrimination. His campaign website lists plans to close the pay gap across the country, including increased federal monitoring over salary discrepancies and making it easier for women to unionize.

When Vice President Kamala Harris was a presidential contender, she had one of the most aggressive wage gap remediation plans. Her proposal would have put the burden of proof on companies across the country to prove to the government that their wages were equal, with fines for companies that could not. The radical proposal failed to help her gain traction with voters—a few months later she ended her campaign, before a single vote was cast in the Democratic primary.

Wage discrimination based on gender has been a federal crime since the 1963 Equal Pay Act, and there is no evidence that such discrimination is commonplace in modern workplaces. A national study this year by PayScale found that after accounting for other factors—such as job title, education, experience, industry, job level, and hours worked—the gender pay gap disappears. Its analysis of raw salary data found that women make 82 cents for each dollar earned by men, but with controls women made 99 cents for each dollar earned by men.

The White House figures do not indicate any gender pay discrimination. In fact, more women than men at the time of the summer disclosure were paid the maximum allowed $180,000 salary for executive employees. Those women include press secretary Karine Jean-Pierre and top advisers such as Neera Tanden and Anita Dunn.

Much of the statistical disparity is caused by the simple fact that there are more women than men working at the White House, likely one of the most highly sought after employers in the political world. More of the lower level positions, which make up the bulk of the team, are held by women, who will likely move on to high-paying positions after attaining all-important White House experience. Employees with the same job title appear to be paid roughly the same amount, regardless of gender.

These sorts of facts are difficult to account for when looking at the pay gap for the entire country.

“While it’s true that male and female staffers in the same position are paid roughly the same, it’s also true that the national gender pay gap of 17 percent cited by the Biden administration would likewise shrink significantly when male and female salaries are compared on an apples-to-apples basis taking into account the multitude of reasons for pay differences that have nothing to do with gender discrimination,” Perry said.

For this reason, Perry said it’s irresponsible for the White House and others to justify new policy proposals.

“The differences in earnings of men and women are the result of many factors,” Perry said, “and the 16-17 percent raw wage gap at the White House or in the national labor market should not be used as the basis to justify corrective or legislative action because there really is nothing that needs to be corrected.”

For Biden, a gender pay gap among his staffers is nothing new. Over his 35-year Senate career, Biden paid women less than men every single year—at one point, women working for Biden were paid just 44 cents for every dollar paid to men.

Women working for Harris when she was in the Senate were also paid less than men.

The White House did not respond to a request for comment on its salary disclosure.